Pinker, evolution and a lot of confusion

Steven Pinker recently created a bit of a debate when he attacked group selection models in an essay entitled: THE FALSE ALLURE OF GROUP SELECTION
His argument is probably best summarized in his final words:


The idea of Group Selection has a superficial appeal because humans are indisputably adapted to group living and because some groups are indisputably larger, longer-lived, and more influential than others. This makes it easy to conclude that properties of human groups, or properties of the human mind, have been shaped by a process that is akin to natural selection acting on genes. Despite this allure, I have argued that the concept of Group Selection has no useful role to play in psychology or social science. It refers to too many things, most of which are not alternatives to the theory of gene-level selection but loose allusions to the importance of groups in human evolution. And when the concept is made more precise, it is torn by a dilemma. If it is meant to explain the cultural traits of successful groups, it adds nothing to conventional history and makes no precise use of the actual mechanism of natural selection. But if it is meant to explain the psychology of individuals, particularly an inclination for unconditional self-sacrifice to benefit a group of nonrelatives, it is dubious both in theory (since it is hard to see how it could evolve given the built-in advantage of protecting the self and one's kin) and in practice (since there is no evidence that humans have such a trait).

It is a thought provoking but superficial critique of an important issue, namely, at what level does selection operate. I just want to highlight three issues that I particularly grappled with, but if interested, you can find lots more here.

My first problem is the very narrow definition of variables. His definition of natural selection only allows genes as carriers of information, therefore, by definition any other source that may influence selection is already ruled out. Once he defined selection like this, there is no further point arguing. Case closed and many interesting social phenomena and their evolution remain unexplained.

The second problem is the variables that he is considering. The main focus is on altruism at the individual level. Of course, if you want to explain altruistic behaviour of individuals, natural selection is without doubt important. However, group selection works on different variables and at a different level. Group selection concerns the survival of groups over a long period. What is important is how information within a group is passed on that allows the survival of group (and the survival of the actual traits). I am traveling in Africa right now and I would be hard pressed to survive by my genetic information alone if I have no cultural tools that help me survive. Of course, I have modern technology that helps me navigate the hostile environment, but once my car runs out of fuel I am done and my credit card is not going to help me find water or food in the desert. Kalahari bushmen or Masai have very different technologies that has helped them survive for thousands of years. Jared Diamond in Collapse provides excellent examples of how cultural technology is important for group survival and how changing environmental conditions can push groups over the edge. Peter Richerson and Robert Boyd in Not by Genes Alone provide a more scientific account of these cultural processes. What is important here is not that it is a historical analysis, but that these accounts use formal models to understand what groups with what technologies are more likely to survive. 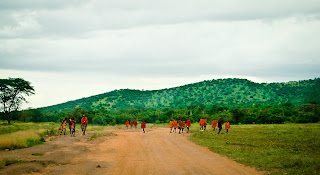 Finally, the description of natural selection used by Pinker is simplistic and does not reflect the emerging complexities of biological processes. The area that interests me most is that of epigenetics: cultural and social variables interact with biological mechanisms, such epigenetic processes switch genes on and off in ways that conflict with classic genetic ideas and the whole idea of a simple translation of genetic information to phenotypes is not tenable anymore. To understand natural selection of complex social traits, looking at genes alone is not cutting the cake.

I really enjoyed reading the essay and the many comments around it. Yet, the argument actually strengthened my conviction that we need to study group processes to better understand human evolution. The learning continues...
Posted by Ron at 10:10 AM