How do computers change cultures?

In a study to be published soon in Social Psychology, Nina Hansen and colleagues examined whether and how giving laptops to children in developing countries changes their cultural beliefs and values. It is a fascinating and important study because it looks at how Western technology affects cultural systems in very basic but profound ways. They gave a group of Ethiopian school children laptops. One year later, they did a follow up and compared those children whose laptop was still functioning with a control group as well as a group of students whose laptop had broken down. They note that after this year the children with functioning laptops had become more independent and endorsed more individualistic values. This change was apparently mediated by a change in self-construal, that is the children had changed their values because of changes in how they saw themselves as individuals. The authors also stated that traditional cultural beliefs and norms were not changed, that is collectivistic values and interdependent self-construals were not affected by laptop use. A fascinating finding, but I believe only a first step towards understanding how technology use affects traditional cultural systems.

Here are some of my questions that appeared while reading their article.
They proposed three different mechanisms of how technology affects culture change:
1. Operation of a modern laptop requires a set of complicated actions which children would have to master completely independently of their elders (a self-efficacy explanation)
2. Social usage of technology can change social relations and self-perceptions, eg., through changes in interaction patterns (email) and well-being. This was one mechanisms that I did not quite understood and a bit more explanation of how this may play out in an African context would have been great.
3. Even a cheap and basic laptop of the kind given to children is an immensely valuable object by local standards, increasing their local status vis-à-vis their elders and peers (a social status explanation).


For me, these mechanisms are actually quite important and could have been tested more directly and effectively. The implications of these mechanisms are certainly quite different from a pragmatic and practical perspective (think of interventions and education programmes).

One important aspect for future studies is a more comprehensive test of these mechanisms. For example, the first mechanism requires a change in cognitive structures and abilities. Therefore, a test of cognitive abilities and knowledge pre-post would have been very useful. This mechanism fits in with a number of sociological theories that argue that cultural change happens via changes in values that then lead to different cognitive strategies. Alternatively, you could argue that greater knowledge and self-efficacy in operating technology provides access to different perspectives which then allows children to develop new ideas and values. It would have been a fascinating opportunity to test some of these bigger theories and ideas in a realistic experiment like this one.

The third mechanisms could have been tested directly as their measure of independent values included both self-direction values - which capture self-directed values focused on exploring and experimenting with new ideas as well as power and achievement values - values focused on dominating others, concerns with status and one's position in the social hierarchy according to social norms and expectations. Hence, it would have been very easy to test whether the status explanation is a plausible explanation or not. I think it is important to differentiate whether these changes are driven by knowledge and self-efficacy or by status processes. If the former is true, than providing schools with laptops and sharing resources is a viable mechanism for empowerment, whereas this would not be effective if it was driven by status mechanisms. 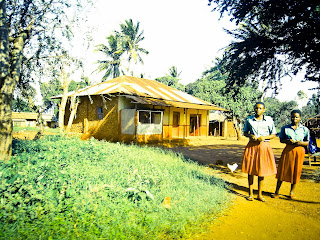 The design is also problematic in some respects. For example, the criteria for selection of students into the two groups is not discussed. Was allocation to groups random? Were the two groups matched in any other important characteristic?
The authors used single items to measure self-construals. On one hand it is difficult to use standard scales in traditional non-Western communities. On the other hand, given the unknown properties of such Western imposed items, it is hard to understand what the item actually measured and validity and reliability can not be assessed.
It was also curious to see that this item of self-construals only mediated effects of condition on independent values in the laptop condition. In the no laptop condition, there was no correlation between self-construal and values. This may indicate validity problems with the item. Alternatively, it could also mean that our Western findings of relatively close links between the self and values are in fact culturally mediated - that is these links are formed by the use of our cultural products.

Overall, a great field study, but it is not quite answering some of the important questions that are posed in the article.