Tales from the field: The last day on the African coast


Time is definitely a rare commodity. I touched down in Capetown, South Africa on a Friday, the 13. Although it feels it was only yesterday, I have one more day and I am back on my way to Europe. It has been a wild and tumultuous two months, stopping in 4 countries and covering thousands of kilometres while having hammered away on my laptop in many random places. I plunged straight into the IACCP winter school business, met 37 bright and eager young minds and had a pretty full-on 4 days of workshop discussions, debates, laughter and a few hours out and about Stellenbosch with this new crew of cross-cultural researchers. The winter school experience was amazing, mind-blowing and exceptionally tiring, mainly the little organizational details that cropped up here and there and everywhere. But it was very cool and emotional to see the presentations of the groups at the end. Even those that had not gone as far as some other projects showed clear signs of research in progress and those intellectual struggles that good research is all about. Sometimes the process is more educational than the polished outcome. So it was a brilliant couple of days. One point though for next time: I am not sure I would have really needed the fridge – sorry, my super luxuriously prized room in the brilliantly spartanic student hostel, but hey, it was good to have a place to change your clothes…

After the winter school, there was one short day to breathe, which I spent with an excursion to the amazing cape peninsula. The weather was stunningly beautiful (as were the prices that we were charged, but only found out later for what kind of ride we were taken).  Then we went straight on with the IACCP conference. One lesson that I still not have learned is how to say ‘NO’. As a consequence of this minor learning deficiency of mine, I was giving non-stop talks most days or was in sessions to attend friends’, colleagues’ or students’ work, and still missed out on so many other interesting looking papers. I am a conference junky, I openly admit and plead happily guilty on this charge, I had a ball and intellectual feast to last me a while. But my sleep deprivation was also quite severe, so at the end of it I was a little nervous wreck. I apologise to everyone who may have thought I was a strange weirdo (well… ). All in all, the conference passed way too quickly and I wished I had more time to talk to friends and colleagues that I had not seen in a long time.

From there things got a bit more complicated. The whole itinerary of the trip was abruptly changed shortly after it started. My plan was to make it from South Africa to Kenya overland through Mozambique and Tanzania. Unfortunately, a few days into this adventure my right eye decided to develop a fairly painful inflammation. Finding an ophthalmologist in semi-rural Mozambique turned into an anthropological field study on the health care system in one of the poorest countries in the world. We finally found a doctor who had some adequate equipment. The original diagnose was scary enough for me to change my schedule and return to South Africa. When I got back there 4 days later, the local eye specialist could not find any evidence of the ulcer that was supposedly and permanently threatening my eye sight.  It was still to be treated with care, but nowhere as serious as it seemed originally. I was devastated. I do not like to lose, especially not against your own body. The medical retreat to Kenya via airplane and a necessary stopover in Dar El Salaam were psychologically painful.

Instead of exploring one of the last frontiers of Africa, I pretty immediately got my nose into the work we were supposed to be doing here in Kenya. Yet, things never quite work out as you had planned them. In addition to all the usual chaos in places like this, we also had some minor political upheavals (luckily I was always a bit far from the action) and the teacher strike right now made a big cross through our field work plans. Instead I was given some sessions on research on field staff and students and beyond that was stuck behind my laptop crunching tons of health related data that we had collected already. Once you get beyond the abstractness of numbers and start connecting the immaterial statistical facts to the images of poverty and inequality that surround you on a daily basis, it can become a pretty heart-breaking and depressing reality. The colourful cloths of women carrying huge loads on their head and little kids on their back, the exotic mud houses with their dark single inner room and picturesque little villages wane when you get closer.

Poverty is only beautiful from a distance. 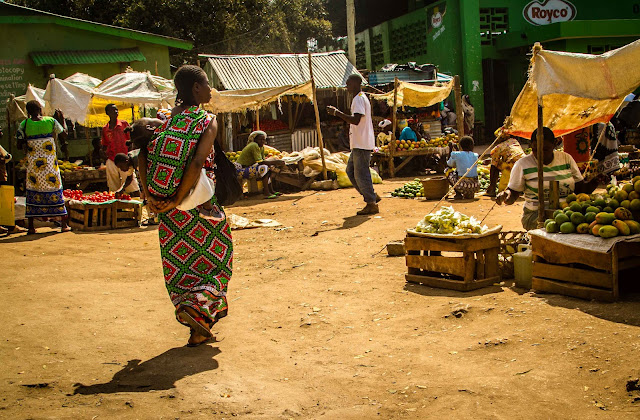 I am not sure how much of this reality is really being noticed by the European and North American tourists in their flash resorts. At some stage, I could not stand anymore some of the comments and conversations I overheard from fellow Western travellers when I had breakfast at some of the hotels I was staying at (yes, I am damn lucky, this time I was mainly staying in pretty amazing and flash places – thanks to sugar mammi Amina ;). This disparity between what you see outside the bubble of western consumerism in the villages and the streets of the Kenyan coast and what you perceive when being at your tourist hotel, with limited excursions into the harsh reality through well-organized and expensive safaris was probably equally depressing.

So it was a lot of work, full on days and long nights, but with widely ranging schedules. Often I would start working around 8am and only finish at 10 or 11pm, sometimes it could also be 2am before the computer was switched off. Internet was mainly through USB modems and access could be described as patchy at best. I was amazed though how smooth the skype connection worked for the Postgrad Committee meeting. There would be breaks for lunch or dinner (well, first it was Ramadan, so food and lunch breaks were fairly random and hard to come by). Sometimes we would go to a fancy hotel (thanks Jackie), more often though in one of the few local eateries. It was really funny to see how quickly you adapt, a colleague from Zambia is just visiting and he was commenting on the things that I do not notice anymore, how dirty some of these places were, with lots of flies and mosquitos and a dark, crammed atmosphere. A funny incidence happened at lunch today, when a big mama sat down behind me and squeezed me into the table that I was sitting at. As this opulent woman also had a very animated eating and conversation style, my chair also bounced up and down with each wiggle of her impressive body. As I was firmly squeezed into the chair and pressed against the table, I moved in unison with my chair directed by that lady. The extraction process – this is me trying to get up and out – was equally funny. The waitress had to intervene and help the lady move so that I could get out.

A trip full of experiences, smells, colours, impressions and learnings. Some of the things I learned are pretty random, like that you should avoid crossing land borders after night fall, even if it is friendly territory. We again had to oil the wheels of informal markets dressed in neat uniforms – well, this is actually a bit of a lie, the main recipients of unaccounted amounts of cash were well-fed plain clothes officers in nice leather jackets with big plastic ID cards hanging around their neck. Or that most of the staple on the coast (cassava, pineapple, maize) were all introduced from South America by the Portuguese. Or that the East African coast had sophisticated civilizations and extensive trade connections all the way to India and China when Europeans had only a vague idea what was behind the horizon of the Mediterranean. African ivory was a prized possession in China and was carved into the most exquisite sculptures. Chinese porcelain needed African raw materials. In turn, the traders and town folk among the Swahili were sipping their spice tea from elegant Chinese tea cups.

Globalization was long here before we knew it… 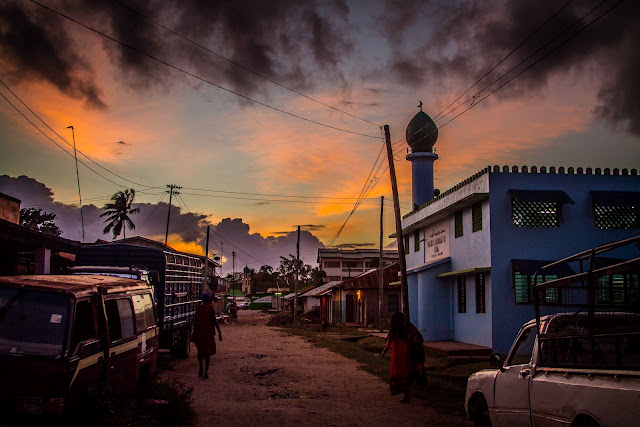 I also learned a new appreciation for washing machines and street lights. The former because it would not force me to wash my clothes every second day or so by hand. I got some good instructions from one of the cleaning ladies and demonstrated them by publicly washing my underwear, to the amusement of the department. The latter because it is pitch black without the moon as a street light substitute. Try walking on a path when you are not a cat or forgot to bring your magic battery-powered torch. A few days ago I wandered straight into a half metre deep hole and nose dived into the sand. Just at that moment a guy had to pass and witness my blind struggles with the African soil. Speaking of moving on roads, I will definitely miss the traffic here and its fluid interpretation of a few basic road rules. I have the perception that people consensually agree to drive on the left (being obedient ex-colonial subjects). Speed limits are not a major worry because of the state of the roads – as a digression, I actually wonder whether speed bumps are the more regular inverse of  random pot holes. But this mathematical law may only apply to the rare occurrence of paved roads. -  However, beyond that it is a country of infinite freedom of driving. This is refreshing after our experiences in Mozambique where we had to contribute to African development (a.k.a police officers’ salaries) on an unpleasantly regular basis. But this state of ultimate freedom (and lack of well maintained roads) also meant for example that an excursion along the Kenyan coast that was supposed to last about 30min turned into a 4 hour odyssey, with the car stuck in sand, random smooth talking politicians hitching rides and us ditching the car in the end because it got stuck on some hug slab of coral stone in the middle of the well-worn sand track.

I should be packing now, but instead are procrastinating writing down these random observations as I am trying to squeeze too much stuff into my little back. Looking back to two eventful and busy months, I wish I had slept less, gone out more and met more people. But then hey… can somebody genetically engineer my body to not feel tired? We got lots of projects done, but still there is so much more to do.

I will miss the amazing tropical fruit, the heat, the sun and the fresh breeze off the Indian Ocean. I will miss the sleepy hectic, the tranquil everyday chaos of cars, motorbikes and people, smells, noises and shy gazes towards that strange muzungu. But I also look forward to seeing familiar friends and family. Next stop is Germany, will be nice to see my folks and friends I have not seen in ages. Will be good to have a clean table, clean cloths, home-cooked food and a clean house with no power cuts and no dust and sand covering your body in the evening.

I think I need a proper holiday… But work is not stopping, I need to finish our book with Peter, Viv and Michael and need to write that chapter for the Advances series. Also look forward to the talks and workshop in Bremen and seeing Diana and Katja and their new academic environment.

May the adventure continue….