The wonderous world of water or the revenge of Mother Earth

I just returned from a few days in the lower lands around Lutherstadt Wittenberg, the famous city where Martin Luther pinned his famous 95 theses that started the reformation. I spent some time with my parents at a little hut in the forest. It is a sandy area, forested by pine trees and in the wider area there used to be lots of open coal mines. Mining started in around 200 years ago, so there is little knowledge of what life was like before. 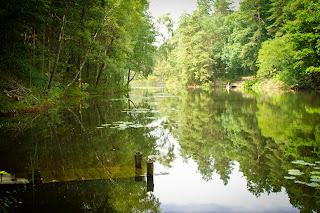 While there, we had to dig a hole to install a new sewage tank. At about 1.50 m, we already hit water. It was not much fun digging to 1.80 m while stuck in the water. Everyone was commenting on how wet is was the last couple of years. The water level of the little lake nearby was about 1 m higher than usual. The guy delivering the tank was telling us that lots of houses in the area got flooded, the water rose in the cellars and even flooded houses at the top of the tiny glacial hills in this area. In the town of Nachterstedt, three people died when a massive 2 ton piece of land disappeared into the nearby lake (an old coal mine). What the hell is happening?

It appears that there is combination of factors at play. First, as mentioned, the area was famous for its rich coal mines. Coal was mined in huge open pits, often hundreds of meters deep. For about 200 years, the water was pumped out and this sank the water table. Since the reunification, the demand of coal dropped and most mines were closed and were converted to artificial lakes. This brought the water table back up to probably original levels. Second, big industries also disappeared and therefore demand for water sank, leading further increases in ground water. Third, private households have to pay higher water prices and water consumption has plummeted. It also appears that global warming in this part of the world leads to higher precipitation, resulting in quasi-tropical down pours year round. Put all these things together and the 'sudden' rise in water and the land slides start to make sense.

The problem is that even supposedly environmentally friendly actions (e.g., closing mines or major industries, raising water prices) can have negative consequences. Humans have altered the planet for such a long time and at such intensive rate that well-intended actions can have unforeseen consequences. Our collective memory does not function to remind us how things were before we really started messing with the climate (which in Europe started probably around 2,000 years ago with the great migration and the ensuing deforestation).

We should not be surprised by random acts of 'revenge' by Mother Earth.
Posted by Ron at 2:06 PM