The Evolutionary Puzzle of Extreme Rituals

These are my notes for the introduction of the recent Science Express Event on Extreme Rituals at Te Papa, sponsored by the Royal Society of New Zealand Wellington Branch and supported by the Centre for Applied Cross-Cultural Research, Wellington.  Many thanks for all those who came and engaged in a really interesting and stimulating discussion. There will be a podcast available soon, till then here are my typed-up notes for the introductory presentation. 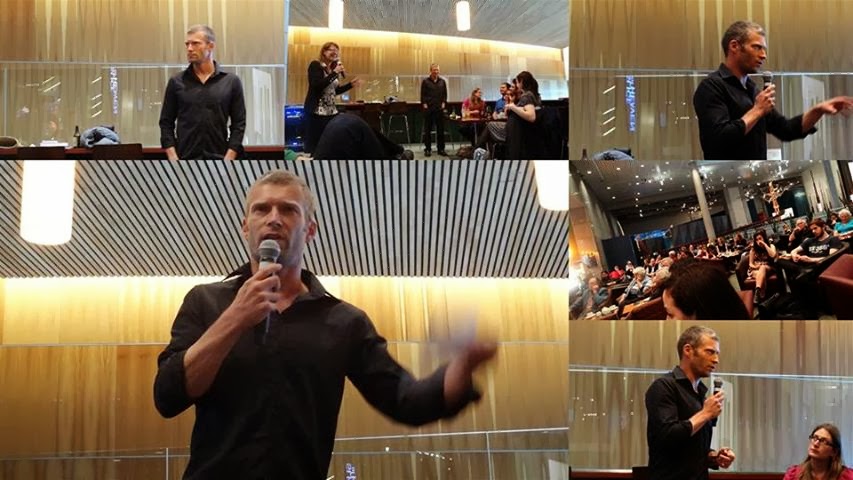 I am interested in collective rituals. Many of us here have been to support the All Blacks, Hurricanes or the Wellington Phoenix at Westpac Stadium;  have been to a concert, watched a theater play or have been dancing in one of the bars. Collective rituals are common.
Why do humans do this? There are no obvious evolutionary functions to these gatherings. They do not help us to get food, ward off predators or to create more offspring (although there may be a bit of  'that' going on after a good night out or when the All Blacks smash the Wallabies ;)
We could say these rituals just serve pure entertainment purposes and are a byproduct of our big social brains. Obviously it does not hurt to sit and watch grown-up guys chase after an odd-shaped ball or sit through a 1 hour lecture at Te Papa.

Yet, there are collective rituals in many societies and cultures that are painful, uncomfortable or may even injure or harm participants. It is difficult to convey the suffering that some people inflict on themselves during some of these events  in a talk like this. People chose to walk over glowing hot coals of 600-700 degrees that burns paper within seconds. Others walk over burning hot asphalt for hours in the midday sun without drinking or seeking shade while balancing a hot pot of milk on your head; they hit their face or back with swords, chains or sharp objects till they bleed profusely. Can you imagine hobbling on knees large distance and then circle churches or temples on your knees, over a period that takes a few hours. Most of us would feel uncomfortable sitting on our knees after a few minutes. There are collective rituals where people drag heavy wooden carts hooked into their skin over a distance of 6 km, a feat that takes 5 or more hours. Would you want to pierce your tongue or face with a number of random objects, needles, skewers, metal rods, swords, guns, tree branches or giant beach umbrellas?

Why do people do these things? The British anthropologist Harvey Whitehouse has argued that these more extreme rituals are the historically more ancient types of rituals. But what is the evolutionary purpose and why have such rituals survived over the millennia till today?

These are difficult questions to answer. There is much speculation and many attempts to explain such events by observers and social scientist.  But it is important to test these ideas more rigorously. I have joined forces with a dream-team of scientists to tackle these big questions in the field.

These rituals may have benefits for both individuals and communities and it is important to separate these effects.
There have been speculations going back more than one century all the way to Darwin and Durkheim that extreme ritual may act as a social bonding devise at the community level. Extreme rituals are thought to increase prosociality and cooperation in the community. They signal commitment to the group:  behaviour speaks louder than words. Groups with strong rituals are more likely to survive. Colleagues and friends such as Joseph Bulbulia, Bill Irons, Richard Sosis and Joe Henrich have written extensively on these theories. How can we test these mechanisms in modern societies?

In one study with Dimitris Xygalatas, Joseph Bulbulia and other colleagues, we decided to study an extreme ritual in the small island of Mauritius. Our aim was to study the social aspects of extreme ritual by studying groups of individuals that differ in their involvement in the ritual (see this blog by Matthew Rossano on the larger context). We measured their behavioural responses – how much money are they giving to the community depending on the ritual they participate in. We used a considerable sum of money to ensure that we can tap into real prosocial motivations, where helping the in-group really hurts your own pocket. We studied individuals who participated in a low ordeal ritual, people who watched the high ordeal ritual and those individuals who engaged in what objectively appeared to be rather painful acts (such as piercing themselves with needles, skewers and rods, carrying wooden shrines on their head or pulling them through the streets by attaching hooks to their skin). Supporting the prosocial theories of extreme rituals, those in the high ordeal ritual gave more money to their temple. More importantly, the perception of pain helped us to explain the pattern  – the more pain you perceive, the more prosocial and charitable you become! It is the amount of perceived pain that binds the group together!!!!!

Extreme Ritual: What might be the motivation for the individuals?

But what is in it for the individuals that perform these rather extreme actions? Why should I care that my group is tighter and more cooperative if it means that I have to hurt myself?
Let's examine one potential mechanism: By committing acts in a ritual that is important and central to the community, I can increase my status and prestige in the community. It signals my commitment to the group and therefore increases my social standing within the group. I become a fully fledged member and can benefit from the support and help of other group members in the future.
To test this social status mechanism I went to Thailand to study another extreme ritual. I again compared groups of individuals – high ordeal devotees who pierced themselves with all sorts of things, assistants who supported the high-ordeal performers and spectators trying to get the blessing of the high ordeal devotees. In order to measure the motivations of individuals, I measured their values (as motivational goals) in life. High ordeal devotees were much more oriented towards getting ahead in life – they are motivated to perform these actions to achieve some level of status and power in the group. In short, for individuals performing these actions is one possible mechanism to move up the social ladder. Often the more disadvantaged and marginalized group members engage in the more audacious acts. Bringing it back to our society, you may just  want to look at who are the boldest and best sports players in a lot of contexts. Often it is minorities that use sports (soccer, rugby, athletics, etc.) as a mechanism to achieve status in a society that values these sports.
Although these rituals may seem bizarre or extreme from an outsiders perspective, they involve universal human characteristics. It is a human universal: we want to be included in our groups. At the same time, we needed strong groups to survive in history. Bringing these threads together, it becomes clear why extreme rituals are appealing to individuals and why these rituals have survived for so long in our history. After all, these extreme rituals are just another expression of our shared humanity.

I hope I have convinced you that it is possible to scientifically study extreme rituals to address interesting questions about us humans. It is amazing to me that despite the popularity and widespread participation in quite extreme collective rituals the world over, we know very little about what is happening to individuals and communities involved in these rituals. I look forward to hearing your comments and reactions and an interesting discussion.

Closing thoughts: Damn, it was a really interesting and fascinating discussion that we had at Te Papa. Many thanks again to everyone for asking questions and sharing their thoughts and experiences. Let's continue the discussion and even more importantly, let's do empirical work on this fascinating aspect of human experience.
Posted by Ron at 1:45 AM